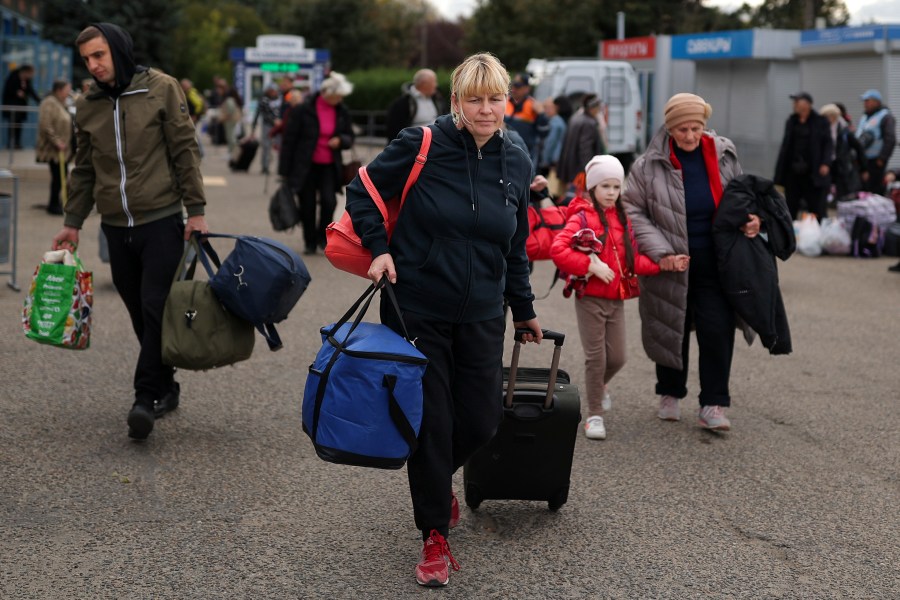 In a video address hours after Russia said it had completed withdrawing troops from the strategically key city, President Volodymyr Zelenskyy said: “As of now, our defenders are approaching the city. In quite a bit, we are going to enter. But special units are already in the city.”

THIS IS A BREAKING NEWS UPDATE. AP’s earlier story follows below.

MYKOLAIV, Ukraine (AP) — Russia relinquished its final foothold in a major city in southern Ukraine on Friday, clearing the way for victorious Ukrainian forces to reclaim the country’s only Russian-held provincial capital that could act as a springboard for further advances into occupied territory.

Russia’s Defense Ministry said its troops finished withdrawing from the western bank of the river that divides Ukraine’s Kherson region at 5 a.m. The area they left included the city of Kherson, the only provincial capital Russia had captured during its nearly nine-month invasion of Ukraine.

Videos and photos on social media showed residents jubilantly taking to the streets, waving Ukrainian flags and chanting in celebration. A Ukrainian flag flew over a monument in a central Kherson square for the first time since the city was seized in early March. Some footage showed crowds cheering on men in military uniform and tossing one man wearing combat fatigues up in the air. Other videos showed villagers embracing troops en route to the city.

Ukrainian officials have not confirmed the city was back in Ukrainian hands. A spokesperson for Ukraine’s military intelligence agency said “an operation to liberate Kherson” and the surrounding region of the same name was underway.

“It will be possible to talk about establishing Ukrainian control over the city only after an official report by the General Staff” of the Ukrainian army, Andriy Yusov told The Associated Press.

Ukrainian intelligence urged Russian soldiers who might still be in the city to surrender in anticipation of Ukrainian forces arriving. “Your command left you to the mercy of fate,” it said in a statement. “Your commanders urge you to change into civilian clothes and try to escape from Kherson on your own. Obviously, you won’t be able to.”

A Ukrainian regional official, Serhii Khlan, disputed the Russian Defense Ministry’s claim that the 30,000 retreating troops took all 5,000 pieces of equipment with them, saying “a lot” of hardware got left behind.

Moscow’s forces still control about 70% of the Kherson region following the pullback ordered amid a Ukrainian counteroffensive.

He added that the Kremlin doesn’t regret holding festivities just over a month ago to celebrate the annexation of occupied or partially occupied regions of Ukraine, deferring all questions about the Kherson withdrawal to the Defense Ministry.

Putin has so far been silent about Kherson, despite making several public appearance since the withdrawal was announced.

Shortly before the Russian announcement, the office of Ukrainian President Volodymyr Zelenskyy described the situation in the province as “difficult.” It reported Russian shelling of some villages and towns Ukrainian forces reclaimed in recent weeks during their counteroffensive in the Kherson region.

The General Staff of Ukraine’s army said the Russian forces left looted homes, damaged power lines and mined roads in their wake. Ukrainian presidential adviser Mykhailo Podolyak predicted Thursday the departing Russians would seek to turn Kherson into a “city of death” and would continue to shell it after relocating across the Dnieper River.

Ukrainian officials were wary of the Russian pullback announced this week, fearing their soldiers could get drawn into an ambush in Kherson city, which had a prewar population of 280,000. Military analysts also had predicted it would take Russia’s military at least a week to complete the troop withdrawal.

Without referencing events unfolding in Kherson, Zelenskyy said in a video message thanking U.S. military personnel on Veterans Day that “victory will be ours.”

“Your example inspires Ukrainians today to fight back against Russian tyranny,” he said. “Special thanks to the many American veterans who have volunteered to fight in Ukraine and to the American people for the amazing support you have given Ukraine. With your help, we have stunned the world and are pushing Russian forces back.”

However, some quarters of the Ukrainian government barely disguised their glee at the pace of the Russian withdrawal.

Recapturing Kherson city could provide Ukraine a strong position from which to expand its southern counteroffensive to other Russian-occupied areas, potentially including Crimea, which Moscow seized in 2014.

From its forces’ new positions on the eastern bank, however, the Kremlin could try to escalate the war, which U.S. assessments showed may already have killed or wounded tens of thousands of civilians and hundreds of thousands of soldiers.

Gen. Ben Hodges, former commanding general of U.S. Army forces in Europe, described the retreat from Kherson as a “colossal failure” for Russia, and said he expects Ukrainian commanders will work to keep the pressure on Russia’s depleted forces ahead of a possible future push for Crimea next year.

“It’s too early to be planning the victory parade, for sure. But I would expect by the end of this year — so in the next, let’s say, eight weeks — the Ukrainians are going to be in place to start setting the conditions for the decisive phase of this campaign, which is the liberation of Crimea, which I think will happen by the summer,” he said in a telephone interview.

Standing in front of what used to be his family’s apartment, Roman Mamontov, 16, awaited news about his missing mother.

Mamontov said he found “nothing there” when he opened the door to look for his mother after the missile struck. Friday was her 34th birthday, the teenager said.

“My mind was blank at that moment. I thought it could not be true,” he said. “The cake she prepared for the celebration is still there.”

Zelenskyy called the missile strike “the terrorist state’s cynical response to our successes at the front.”

“Russia does not give up its despicable tactics. And we will not give up our struggle. The occupiers will be held to account for every crime against Ukraine and Ukrainians,” Zelenskyy said.

The Russian Defense Ministry didn’t acknowledge striking a residential building in Mykolaiv, saying only that an ammunition depot was destroyed “in the area of the city.”

Mykolaiv mayor Oleksandr Sienkevych told the AP that Russia could step up its shelling of his city in light of Ukraine’s advances. “The more success the Ukrainian army has, Russia lowers its bar of terrorism,” he said.

Sienkevych said that S-300 missiles launched from the Kherson region can reach Mykolaiv within one minute. Some 149 civilians have been killed and 700 people seriously wounded in the city since the Feb. 24 start of the war.

The state of the key Antonivskiy Bridge that links the western and eastern banks of the Dnieper in the Kherson region remained unclear Friday. Russian media reports suggested the bridge was blown up following the Russian withdrawal; pro-Kremlin reporters posted footage of the bridge missing a large section.

But Sergei Yeliseyev, a Russian-installed official in the Kherson region, told the Interfax news agency the bridge hadn’t been blown up.

A Chilly Finish To The Weekend

Part of a furniture store collapses from fire in Lincoln, RI...